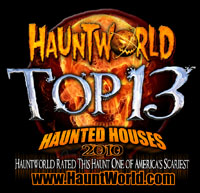 What tends to scare people the most is the unexpected. These places are pretty unexpected!
– Time.com (2010)

One of the finest haunts is the 100,000 square foot behemoth known as the Beast. It’s ghost effects rival those of Disney’s Haunted Mansion, and visitors exit the building via a four-story slide. It’s all unforgettable!
– Time.com (2010)

The Beast may well be one of the largest haunts I have ever gone through.
– HauntWorld (October 2009)

The expanse of these scenes is stunning!
– HauntWorld (October 2009)

The Beast is just insanely huge, and the open format scenes are absolutely original.
– HauntWorld (October 2009)

“A haunted house is like a horror movie and you are figuring out the story as you walk through it.”
– Time.com (October 31, 2006)

Judging from the screams that pour out of them, there’s some seriously scary stuff going on inside!
– Dodge Magazine (2005)